Ever since Narendra Modi came into power, he has been trying to push for promoting manufacturing in India. India’s GDP for too long has been dominated by the service sector. Here is a snapshot of a table [1]. 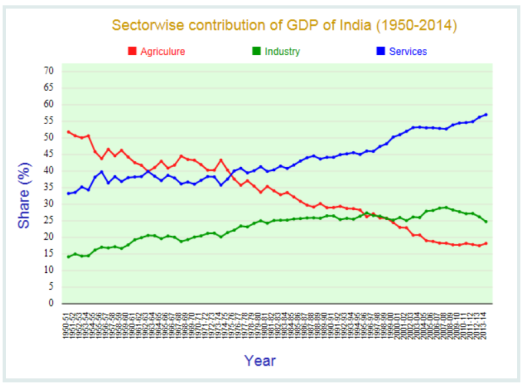 A big contribution of our GDP comes from the service sector, and it has been growing over the last few decades. I think over-reliance of the GDP on service sector is not a good sign as the decision making powers lies completely with the organizations that ask for the services in the first place.

Narendra Modi in his bid to reverse this started the Make in India program which focused upon building manufacturing capabilities inside India, but it never really took off. He has now gone back to a more popular method to infuse enthusiasm in the manufacturing sector: defence.

The reason why engineering and science progressed so fast in the beginning of the 20th century were the two world wars. Communication and radar technology development accelerated during those days. The top institutes in US at that time played a major role in radar and communication systems for the aid of military. And it always easy to get funds from the Congress by saying , “We need more funds because we are researching this area which can help us in better equipments for the army.” Cold war helped too.

India is the world’s largest arms importer. Which is also not a great thing if a country aims to become a super-power. India needs to modernize its military inventory.

Combining the two things, the current government is tying up defense purchase contracts with building of a local ecosystem. By forcing the major arms manufacturer to build their assembly lines here in India, and to use 30% of the materials sourced locally, they have no option but to build a local supply chain to bag the >100 billion dollar contracts. Which means we will see a lot of the suppliers who have traditionally supplied to the big sharks moving (parts of) their manufacturing shops here.

When an ecosystem starts building up, we will definitely see a lot of local businesses trying to compete to get a piece of the pie from the likes of Boeing and Lockheed. Indians are fiercely competitive, and have given several deep pocketed companies like Amazon and Uber sleepless nights. I see no reason why it would not be the case here provided they get the necessary funds! [Which has become a bit of a thorny issue with all hundreds of crores of write-offs the banks are having to do thanks to non-performing assets].

I believe its a good start for the Indian economy as a whole.

On a more related news, the government has imposed 20% import duty on printed circuit boards assembled outside the country. This means that on an average phones are going to get expensive. Indians love free and cheap stuff. This is a nice trick (without becoming a trade war) to force the companies to assemble the PCBs here in India. I am kind of happy about this move!